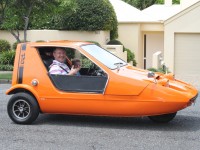 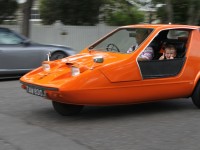 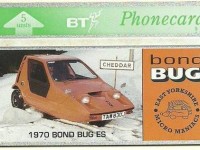 The Bond Bug – what an iconic micro car!
We all know the Messerschmitt KR200s, BMW Isettas and the Goggomobils but the best of them is probably the Bond Bug.
The Bond Bug was the brain child of Tom Karen who designed the car in the mid 1960’s and his dream became reality as Reliant bought out the Bond car company in 1969. The Bond Bug entered production in 1970 and in total 2,268 cars were built before production ceased in May 1974.
The car offered for sale is an early 700ES which was the top of the range model and featured such optional extras as alloy rear wheels, wing mirrors, sports tyres, upgraded interior and a “formula-1” style steering wheel.
This car was purchased in mid 2011 in the UK and imported to Australia by its current owner. The car is in excellent condition having been repainted and mechanically sorted by its previous owner. It drives really well and everything works as it should. Like many Bugs it has had an engine upgrade and now runs a 750cc Reliant engine. It weighs less than 500kg (unladen) so it really gets along! Rare in Australia and good ones are hard to find anywhere.
What makes this car even more unique is that it was the featured on the BT phone cards in the UK (it was then registered as TAW 830J) and has been signed by Tom Karen.
Guaranteed to turn more heads than a Lamborghini Countach!