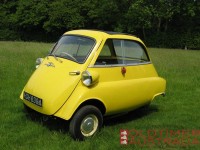 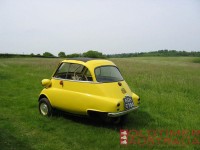 The Isetta was the brainchild of Renzo Rivolta, founder of the Italian firm of Iso Spa. Iso was known as a company for building refrigerators, motor scooters and small three-wheeled trucks. In the early 1950’s Rivolta decided he would like to build a small car for mass distribution and in 1952 Iso had designed a small car that used the scooter engine and named it Isetta – an Italian diminutive meaning little Iso.

The Isetta caused a sensation when it was introduced to the motoring press in Turin in November 1953, it was unlike anything seen before. It was so small (only 2.29 m long by 1.37 m wide) and egg-shaped, with bubble-type windows, the entire front end of the car hinged outwards to allow entry. In the event of a crash, the driver and passenger were to exit through the canvas sunroof! The steering wheel and instrument panel swung out with the single door, as this made access to the single bench seat simpler. The seat provided reasonable comfort for two occupants, and perhaps a small child.

The Bubble Car was born and the Isetta was ultimately a huge success. Rivolta decided the best way to capitalise on this success was sell licences to other companies to manufacture the little car. Over the years Isettas were manufactured in countries all over the world, including Spain, Belgium, France, Brazil, Germany and the United Kingdom.

Perhaps the best known of the Isettas is the BMW Isetta, the first of which was built in 1955 and was powered by a 247cc single cylinder four stroke engine. In time the power plant was upgraded to 300cc and the Isetta was built in both three and four wheel configuration.

Circa 160,000 BMW Isettas were built, however, today the numbers are thin on the ground and they are quite hard to find.

These cars are becoming quite collectible and almost every serious car collector or enthusiast has either had one or wants to have one!

We are pleased offer a lovely example of the BMW Isetta 300cc three wheeler. This particular car was manufactured and delivered new in the UK in 1961 and has been recently imported into Australia.

I purchased this car from a collection in the UK in January of this year. It had sat for many years and required recommissioning. The car has had the brakes done, the fuel tap replaced, the carburettor stripped and rebuilt, some electrical work done and it has also been serviced.

The car presents and drives well.