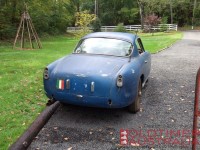 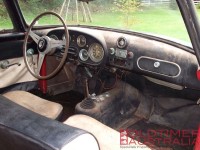 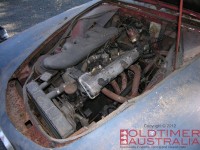 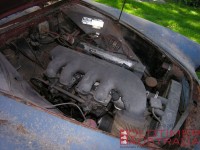 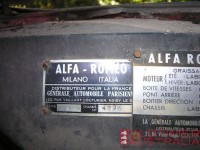 The Alfa Romeo 1900 series was introduced in 1950 and was the company’s first post war design. The compact design proved a great success and a number of different models were built, including the Saloon, Saloon T.I., Super Saloon, Saloon T.I. Super, Sprint and Super Sprint.The most desirable of these models was the Super Sprint or “SS” which was produced from 1956-1958. This model is an aluminium bodied coach built car by Touring of Milan and has the high performance engine (capacity increased from 1884 cc to 1975 cc and twin carburettors).

The ultimate specification of the 1900 line-up was without question the ultra-rare “1900C SS” variant that featured both the shorter chassis as well as the most developed and best performing engine, gearbox and revised final drive ratios. Brakes were “alfin” double-leading shoe, self-adjusting at all four corners and the fronts featured ducting and scoops for added cooling. Alfa’s 1900C SS model also incorporated a fantastically well designed and thoroughly sorted 5-speed gearbox with full synchronization on 2nd, 3rd , 4th and 5th gear. The ratios were carefully selected to match the torque and rpm curve of the high specification, twin-cam “Tipo 1308” series engine. As a result of the performance increase and use of a five rather than four speed gearbox, the standard 4.1:1 final drive ratio was unnecessary. A taller 3.75:1 unit was instead fitted which allowed for far better top-speed as well as far less rpm at speed in any gear.

Alfa had always envisioned making the 1900 a platform for various coachbuilders to express themselves freely. The 1900C SS lent itself to this end quite successfully and Touring, Pinin Farina, Zagato and Ghia produced some strikingly beautiful as well as competitive examples. While those from Touring and Pinin Farina utilized mostly steel bodies with some alloy opening panels, Zagato and Ghia’s examples featured all alloy body construction. The standard production 1900s tipped the scales at 2,4001bs (1100kg) while the Zagato and Ghia versions of the 1900C SS were often less than 2,0001bs (900kg.) Less weight obviously translated to better performance on the track and in the tours and rallies that favored these nimble coupes. As such, today, these beautiful “custom coachwork” examples are by any measure the most sought out by both collectors and racers alike.

We are delighted to offer a 1956 Alfa Romeo 1900C SS Tipo IV Coupe that is a highly developed short-chassis Super Sprint late production model. The car was fitted with the elegant three-window aluminum bodied coupe body by Touring of Milan. The body style is referred to today as the Tipo IV and is extremely rare with only circa 100 of these cars built.

The car is factory left hand drive and has been authenticated as “matching numbers” by Storica Alfa Romeo and is:

The car was delivered new to Paris, France and found its way to the USA in the mid 1960’s where it resided until it was recently purchased and imported in to Australia by its current owner.

This car has a number of unique and interesting competition features, including a drivers race seat, ventilated front brakes and a Nardi steering wheel. Other features include:
– the doors have quarter windows (we believe only one other car has these);
– floor shift gear change (the majority were column shift); and
– a dash clock

This is a unique opportunity for the astute enthusiast to purchase this rare car and restore it back to its former glory.

Eligible for all major events including the Mille Miglia.

The car is available now in Brisbane, Australia.