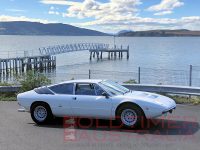 The Lamborghini story is fascinating in itself but for the company to have survived all these years and indeed celebrate its 50th Anniversary in 2013 is quite amazing. Ferruccio Lamborghini was an entrepreneur, a very successful businessman and a lover of the finer things in life, including sports cars. He was fortunate enough to own some wonderful cars including Ferraris, however, he found fault with them all. According to the legend, following a meeting with Enzo Ferrari to discuss some of the shortcomings of his cars, Enzo dismissed Ferruccio and he subsequently decided that he could and would build a better car.

Not long after, in May 1963, Automobili Ferruccio Lamborghini SPA was established and the small town of Sant’Agata Bolognese, located between Modena and Bolgna, was chosen as the location to build the factory. Born under the Zoadiac sign Taurus, Lamborghini chose the raging bull as the emblem for his sports cars.

Lamborghini knew what he wanted and he put together a highly skilled team and his first car, the 350 GTV, was shown at the Turin Motor Show in October 1963. This car received mixed reviews, however, Lamborghini was not deterred and made a number of improvements and design changes to the original concept and the first Lamborghini production car the 350 GT left the factory in 1964.

The 350 GT evolved into the 400 GT 2+2 and later the Islero. In parallel to building these classic front engine V12 GT cars, Lamborghini wanted to build a super car, enter the Miura first shown as a rolling chassis in 1965, and also a GT car that could comfortably seat four people, enter the Espada in 1968. The mid to late sixties were good times for Lamborghini and his cars were revered the world over. In 1970 the Islero was replaced by the Jarama. Lamborghini wanted to enter the junior supercar market and introduced the Urraco or ‘little bull’ named for the fighting bull which killed the toreadore Manoleten, at the 1970 Turin Motor Show. The Urraco attracted a huge interest from the motoring world and Bertone’s classic wedge shape received critical acclaim at the time.

It wasn’t until some two years later in 1972 that the first production cars rolled off the Sant ‘Agata production line. Lamborghini hoped to build the Urraco in big numbers, however, this never eventuated and only 520 of the P250’s were built up until 1975 when the P300 was released. The world economy changed quickly and the early 1970’s were a tough time for Lamborghini. Additionally, the Urraco had some teething problems early on and the car unfortunately developed a reputation as unreliable. This was perhaps unfair as once Lamborghini ironed out the bugs the car was in fact a little gem and properly sorted was a genuine threat to Ferrari’s 308, Maserati’s Merak and the Porsche 911 of the day. The P300 was indeed a fabulous little car and in the October 1978 issue of Car magazine Mel Nichols pits the Lamborghini Urraco against a Ferrari 308 GTB and a Maserati Merak SS. The article is compelling reading and Nichols picks the Urraco as his favourite.

Oldtimer Australia is delighted to confirm the sale of this 1974 Lamborghini Urraco P250S.

This factory records confirm this is an Australian delivered, factory right hand drive example that was delivered new to Auto Modena. It was originally ‘bianco” (white) with a ‘nero’ (black) interior, which is how the car is presented today and a fabulous colour combination for the Urraco.