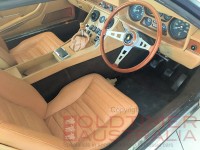 The Lamborghini story is fascinating in itself but for the company to have survived all these years and indeed celebrate its 50th Anniversary in 2013 is quite amazing. Ferruccio Lamborghini was an entrepreneur, a very successful businessman and a lover of the finer things in life, including sports cars. He was fortunate enough to own some wonderful cars including Ferraris however, he found fault with them all. According to the legend following a meeting with Enzo Ferrari to discuss some of the shortcomings of his cars Enzo dismissed Ferruccio and he subsequently decided that he could build a better car.

Not long after in May 1963 Automobili Ferruccio Lamborghini SPA was established and the small town of Sant’Agata Bolognese, located between Modena and Bolgna, was chosen as the location to build his factory. Born under the Zoadiac sign Taurus Lamborghini chose the raging bull as the emblem for his sports cars.

Lamborghini knew what he wanted and he put together a highly skilled team and his first car the 350 GTV was shown at the Turin Motor Show in October 1963. This car received mixed reviews, however, Lamborghini was not deterred and made a number of improvements and design changes to this original concept and the first Lamborghini production car the 350 GT left the factory in 1964.

The 350 GT evolved into the 400 GT 2+2 and later the Islero. In parallel to building these classic front engine V12 GT cars, Lamborghini wanted to build a super car, enter the Miura first shown as a rolling chassis in 1965, and also a GT car that could comfortably seat four people, enter the Espada in 1968. The mid to late sixties were good times for Lamborghini and his cars were revered the world over.

Lamborghini continued the tradition of naming his cars with association to the legendary bull and Espada is Spanish for sword.

The Lamborghini Espada was first shown to the public at the 1968 Geneva Motor Show where a spectacular metallic gold car took the world by storm. Bertone used many styling cues from the Lamborghini Marzal (including the very funky hexagonal dash layout) and Jaguar Pirana show cars, The Espada wasn’t beautiful, but it was very unique and many thought striking. It was a brilliant design – a sporting GT car on the outside, yet a sedan on the inside!

Another significant private Lamborghini sale at Oldtimer Australia. This time a 1970 Lamborghini Espada. This is a very rare and desirable early Series 2 Espada with the Miura style knock off wheels. It is one of a handful of Australian delivered, factory right hand drive examples.