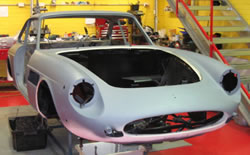 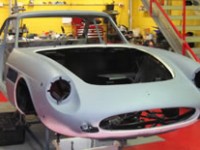 The Ferrari 330 GTC debuted at the 1966 Geneva Motor Show. The car was designed to fill the gap between the four seater 330 GT and top of the range 275 series cars. Built on the 275 chassis and powered by the proven four litre twin cam V12 engine (with 300 hp) and with fully independent suspension, the 330 GTC was regarded as the best gran turismo car in the world at that time.

We are delighted to offer a fully restored and fully sorted matching numbers example.

This particular car was delivered new to Europe and is understood to have spent its entire life there with three owners until being purchased by Oldtimer Australia in Rome, Italy in 2002.

The car was then imported into Australia and it was completely stripped and underwent a total nut and bolt restoration. The majority of the work was undertaken by a well-known Ferrari specialist on the Sunshine Coast just north of Brisbane, except the body which was stripped and painted by a specialist in Melbourne.

During the restoration the car was converted to right hand drive and all new Ferrari factory parts were used.

In January 2007, which was part way through the restoration the car was sold to its current owner.

The current owner opted to have the car finished in grigio with a contrasting red leather interior which is a fantastic colour combination.

Today the car presents fabulously and is best described as a concours condition car. It has travelled less than 1,000 mile since the restoration and presents and drives like a new car. It also fitted with air conditioning.

The car has books, tools and a good history file.