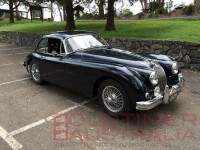 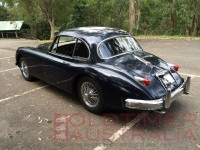 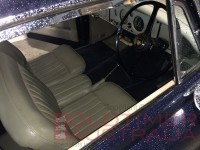 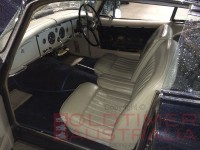 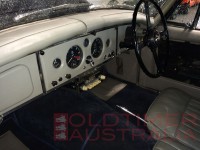 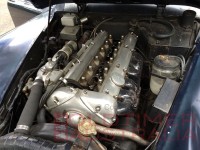 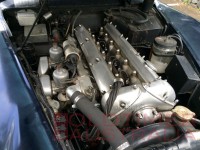 The Jaguar XK120 was launched in 1948 at the London Motor Show. It caused a sensation, which persuaded Jaguar founder and design boss William Lyons to put it into production. It was Jaguar’s first sports car since the SS 100, which ceased production in 1940. The “120″ in its name referred to its 120 mph top speed, which made the XK120 the world’s fastest production car in its day. It was available in two open versions, first as the roadster (designated OTS, for open two-seater), then also as a drop head coupé (DHC) from 1953. The car was also available as a closed or fixed head coupé (FHC) from 1951.

The XK120 was succeeded by the XK140 which was launched in late 1954 and sold through until 1957. Whilst the XK140 looked similar to the XK120 there were in fact many subtle and indeed important differences. The XK140 featured a more spacious cabin and had improved brakes, suspension and steering. Visually the car had American style bumpers with overriders, a different grille (that had fewer, thicker vertical bars), a chrome strip on the bonnet & boot and an emblem “Jaguar Winner Le Mans 1951-3” on the boot also.

The final iteration of the XK was the XK150 that was released in 1957. Whilst its family resemblance to its forbearers is obvious the XK150 was in fact a very different car. Most noticeable was the change to a one piece windscreen and the smoother ‘wing line’ from the front to the rear of the car. Cabin space was significantly improved making the XK150 a far more comfortable car to drive. Mechanically the first XK150’s were similar to the XK140’s, however, an ‘SE’ variant with a modified cylinder head giving more power and an ‘S’ variant with triple SU carburetors giving even more power were soon available. In 1959 engine capacity was increased from 3.4 litres to 3.8 litres.

Like the XK120 both the XK140 and XK150 were offered in three body style being the roadster, drop head coupe and fixed head coupe.

We are delighted to offer this 1959 Jaguar XK150 Fixed Head Coupe. This is an Australian delivered ‘SE’ model that was sold new through Brysons in Melbourne. It is documented in John Elmgreen’s book – The Jaguar XK Australia and has a known history from new.

After a passing through a few different owners early in its life, firstly in Victoria and later NSW, it was acquired by a Ms Sue Simpson of West Ryde in NSW in 1973. At the time the car was finished in cream with a grey leather interior. Very early in Ms Simpson’s ownership the car was effectively restored, having the engine rebuilt and a new diff fitted. At the time the car had travelled some 72,000 miles and the odometer was reset. The car was also repainted in dark blue.

Ms Simpson owned the car for some forty years before it came to Queensland and passed through two subsequent owners and then to the family we acquired the car through five years ago. In the previous owners care the car has had its suspension rebuilt, regular maintenance undertaken as required and some paint touch ups completed. The car was routinely driven once a week.

Today the car presents as a ‘ well cared for fifty something year old car’. The interior is in excellent condition and mechanically the car is strong. It is tight on the road which one would expect following its recent suspension rebuild. The engine pulls strongly and the automatic transmission shifts up and down smoothly through the gears. There is a document on the history file from circa 5 years ago showing compression test results which were good. We have subsequently carried out a compression test on the engine which was excellent. The body looks to be structurally good as are the panel gaps. The paint is a little tired, however, it is presentable. The previous owner advised he had the doors repainted as the paint had crazed badly. Subsequently the doors present far better than the rest of the car, however, after an aggressive ‘cut and polish’ the car has come up pretty well.

The car has just been serviced, had all of the fluids changed, some general maintenance works completed and a set of new Michelin X Series tyres fitted.