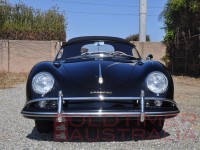 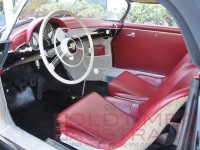 The Porsche story is a fascinating one and its roots go back to the 1930’s when Professor Ferdinand Porsche was instrumental in the design of the first Volkswagen and also Auto Union race cars. By 1939 he had built three Porsche cars to compete in the 800 mile race from Berlin to Rome, however, the race was cancelled due to the war. Porsche was forced to focus on supporting the German war effort, however, he had always wanted to build his own cars and that dream lived on. In 1944 Porsche was forced to leave Stuttgart and he set up a small operation in Gmünd, Austria. Soon after the Porsche family and many of their engineers were captured and sent to jail. Ferdinand Porsche’s son Ferdinand junior, or ‘Ferry’ as was known, was released six months later and he returned to Gmund to rebuild the family company. Things moved quickly and Porsche was involved with cars again and shortly thereafter in mid-1948 the first Porsche 356 was built. It is understood Porsche built some 50 hand built aluminium bodied cars in their small factory at Gmünd before relocating back to Stuttgart, Germany. The rest they say is history as the 356 evolved into one of the most successful sports cars ever built. The 356’s did well in competition all over the world and its greatest success was perhaps a class win at Le Mans in 1951.

Oldtimer Australia is delighted to offer a 1958 Porsche 356A T2 Speedster.

The car has been restored to the highest possible standard and it presents stunningly in black with a red interior. It doesn’t get any cooler than this!